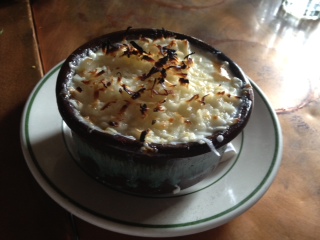 This is my favorite Egyptian dessert, pieces of puff pastry baked in a clay bowl with nuts, raisins and coconut, covered in hot sweetened milk and cream. What makes this dish more delicious is the story behind how it got the name ‘Om Ali’. Legend has it that Om Ali was the first wife of the Sultan Ezz El Din Aybek. In , women were not allowed to rule, but were permitted to be guardians to their sons who would become king when they came of age.
When the sultan died, his second wife had a dispute with Om Ali over whose son would be the successor to the Sultan. The second wife was heavily guarded making it difficult for Om Ali to get rid of her.Om Ali hatched came out with a perfect plot to kill her.She was beaten to death by her handmaids while taking a bath.To celebrate her death, Om Ali made this dessert and distributed it among the people of the land.

There are many variety of recipes available to make Om Ali’, but i found this recipe to be super easy to do at home and it came out to be the best middle eastern bread pudding I have ever tasted!

1. Break the puff pastry into bite-sized pieces.
2. Mix pastry with nuts, raisins and coconut and put in a deep serving dish.
3. Put the sugar and milk in a pot and bring to a boil.
4. Pour over the pastry, nuts and raisins.
5. Spread whipped cream evenly over mixture.
6. Bake 25 minutes at 400 degrees.
Share
Facebook Twitter Pinterest Linkedin

Subscribe to our weekly newsletter and get all the tasty recipes straight to your inbox plus a FREE keto meal plan grocery list!
Free keto meal plan
+ weekly recipes
Subscribe
We hate spam as much as you do, and you can unsubscribe anytime.