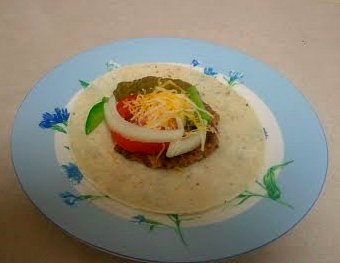 Preparation
Tomato- Poblano Pepper Sauce – Prep Time – 45 minutesCoat chopped pieces of poblano pepper with olive oil. Bake in oven at 425 F for 25 minutes till you see the skin darken and wrinkle. Take out pieces and store in paper towel for 5 minutes. Peel the outer skin.
Stir fry chopped garlic in olive oil for 2 minutes and add 4 tomatoes and some cilantro and stir fry till most of liquid is gone.
Blend the stir fried veggies with the poblano pepper, olive oil and remaining cilantro.
Sauce is ready to serve.

Burger Preparation – Prep Time – 15 minutes stuffing + 15 minutes frying the pattiesStir fry onions till browned and add veggies one at a time while stir frying each ingredient for 1-2 minutes. Add the tamarind paste, salt and pepper at the end and stir fry for another 3 minutes.
Make 1 inch balls of the stuffing and dip in egg white and roll in bread crumbs. Fry the balls in a thin coating of olive oil and flatten them as they are being fried.

Subscribe to our weekly newsletter and get all the tasty recipes straight to your inbox plus a FREE keto meal plan grocery list!
Free keto meal plan
+ weekly recipes
Subscribe
We hate spam as much as you do, and you can unsubscribe anytime.